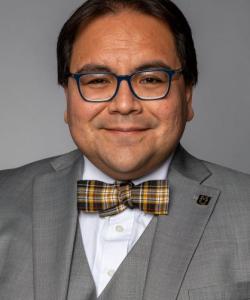 Michelangelo Landgrave joined the Truman School of Government and Public Affairs in Fall 2022. Prior to coming to Mizzou, he was a joint fellow at Princeton University's Department of Politics and the Center for the Study of Democratic Politics (CSDP). He holds graduate degrees in Political Science (PhD) and Economics (MA). He was previously an associate fellow in the Federal Government's Office of Evaluation Sciences (2021-2022).

His research has appeared, or is forthcoming, in Political Analysis, Legislative Studies Quarterly, and the Journal of Economic Behavior & Organization, among other top outlets. Dr. Landgrave has broad research interests but his current primary agendas are (1) immigration politics and (2) state legislatures. Dr. Landgrave's regional focus is the United States, Mexico and the Americas broadly.

He (co-) coordinates the Truman Interdisciplinary Group for Experimental Research (TIGER) and the S. Truman Research group on Immigration Political Economy (STRIPE). If you are a faculty member or graduate student interested in experimental research and/or immigration politics, reach out!