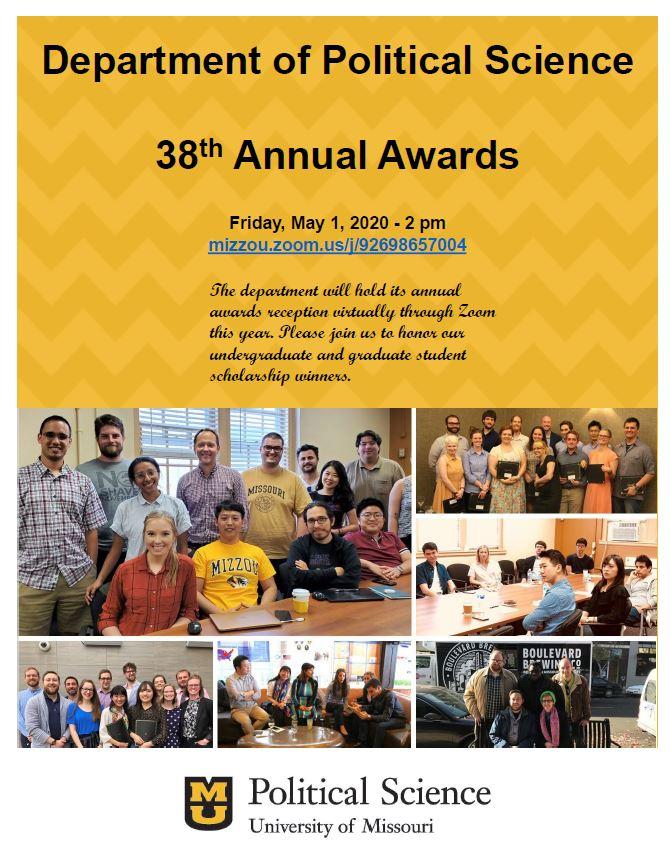 On May 1, the department held our annual awards reception online via Zoom, honoring our undergraduate and graduate student scholarship winners.

William L. Bradshaw
The William L. Bradshaw Scholarship is awarded from funds contributed by the fami-ly and friends of William Bradshaw, a member of the Political Science faculty for from 1927-1961 and dean of the School of Business and Public Administration from 1946-1961. Dean Bradshaw taught Missouri government and politics, conducted research on local government in Missouri, and served on the Columbia City Council as a dele-gate to the convention that wrote our present constitution.

Bryan L. Forbis
In honor of Bryan’s dedication to academic studies and devotion to public service, the University of Missouri Political Science Department has established an enduring memorial in the form of a scholarship to be awarded annually to a student studying American politics and public policy. A committed Mizzou alumnus and an enthusiastic scholar, Bryan had a distinguished career in Missouri government serving in a number of state agencies.

J.G. Heinberg
The Heinberg Scholarship is awarded from funds provided by the family and friends of J.G. Heinberg, a member of the faculty from 1926-1953. Professor Heinberg taught and did research in the fields of comparative government and political theory.

Arthur and Joan Kalleberg
The Kalleberg Family Memorial Scholarship was established by Arthur L. and Joan M. Kalleberg along with family and friends. Arthur Kalleberg, a Byler Distinguished Professor and Frederick A. Middlebush Chair, served as a member of the Political Science faculty from 1961 until his retirement in 1994. He and Joan were married for 50 years.

Michael A. Kinney
The Michael A. Kinney Scholarship is awarded from funds provided by the friends of Michael Kinney, who served for more than 50 years as State Senator from the City of St. Louis. At the time he retired, he was recognized as having the longest service of any state legislator in the nation.

Betty Anne McCaskill
Established by Senator Claire McCaskill and Mr. Joseph Shepard in her mother’s honor, this scholarship provides Political Science undergraduate majors with support to complete an internship on Capitol Hill. Like her daughter, Ms. Betty Anne McCaskill is a Mizzou Political Science graduate. She always promoted the importance of helping bright minds from any background obtain leadership experiences in politics.

Carol Raulston
The Carol Raulston Scholarship was established from endowment funds provided in 2014 by the National Mining Association in memory of Carol Raulston, Senior Vice Presi-dent, Communications of the National Mining Association for 11 years. Carol held a Master’s of Arts degree in Political Science from the University of Missouri as the one student per year selected from Missouri for a National Defense Act Scholarship. One or more annual scholarships are given to students in the Political Science Department that have demonstrated an interest in the public and political representation of business and industry in America.

Robin Remington Professor Robin Remington was the first woman Political Science faculty mem-ber in the department and taught comparative politics from 1974 to 2000. The Robin Remington Scholarship is awarded to graduate and undergraduate stu-dents in Political Science. The graduate award assists first-year students whose program of study includes conflict resolution and negotiation, civil-military relations, or women and political power. The undergraduate award recognizes a nominated research paper or essay on these subjects.

Missouri Excellence in Political Science Teaching Award
This award is presented to one or two outstanding graduate students for instruction, including teaching independent sections, leading discussion sections, or other particularly notable instructional service. The first award was given in Spring 2005.

Dean L. Yarwood
The Dean L. Yarwood Scholarship was established as an award for graduate and undergraduate students of Political Science who have an emphasis in either Public Policy and Administration or American Politics. While at MU, Professor Yarwood taught courses in the areas of Public Administration and Politics of Bureaucracy. He was a member of the Political Science faculty from 1967 until his retirement in 2000.

Edith Taylor Therrien Award
The Edith Taylor Therrien Scholarship is awarded to highly accomplished women graduate students or to outstanding scholars studying women and politics at the University of Missouri. This scholarship was established in memory of the grandmother of Professor Emeritus Robin Remington, from funds provided by her family.