With professional experience in all three sectors, Dr. Staley teaches the practical tools of management, planning, and resource development in support of policy and public value.  He entered the field of management and resource development in 1975 with the Business and Industry Extension Program of the University of Missouri System. He became a full-time consultant in 1996 and since then he has led or counseled more than 100 organizations in all three sectors—public, private, and nonprofit—toward achieving their aspirations and missions, and has helped them to increase their various revenue streams by more than a billion dollars.  In 2010 he joined the Truman School of Public Affairs faculty and, more recently, the Affiliated Faculty of the Center for Entrepreneurship and Innovation.

Prior to becoming a consultant, Eric served as vice president and chief development officer of three universities and the CEO of a national arts and education nonprofit organization. As a consultant, he provides full-service counsel and education to a broad client base that includes such diverse groups as arts associations, social service agencies, colleges and universities, for-profit corporations with giving and sponsorship programs (most recently PetSmart Corporation), City Parks and Recreation departments, Chambers of Commerce, and the United States Marine Corps. He has coached executive leadership and has trained volunteers for United Way. Additionally, he has counseled on a number of local economic development efforts in which municipalities have developed public-private partnerships in support of community projects.

As a member of the executive board of the Staunton, Virginia, Chamber of Commerce, he founded “200 by 2000: A Community Leadership Institute,” for which he received a citation for “Vision and Leadership.” Shortly thereafter he was elected to Staunton’s City Council where he spearheaded the public/governmental role in the successful consolidation of two regional hospitals.

Eric earned a Ph.D. from the University of Missouri and holds a certificate in higher education management from Harvard University. His formal education also includes graduate studies at the University of Oxford. He is certified in social entrepreneurship by the United States Association for Small Business and Entrepreneurship and has been identified as an international expert in the field by the U.S. State Department.  He represented the United States’ social entrepreneurship efforts through a 10-city lecture tour in Germany in May, 2017, sponsored by the German and American state departments through the U. S. Embassy and the German-American Institute.  In 2018 he served as seminar leader for a group of 10 interdisciplinary faculty at the Europäische Akademie Otzenhausen, Germany, participating in discussions of the European Union’s sustainability policies concerning climate, agriculture, and migration. 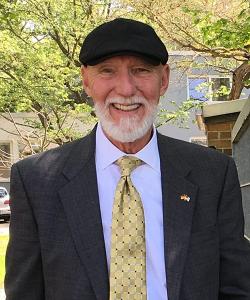